Home » Uncategorized » When coming in 38th is better than 1st »

When coming in 38th is better than 1st 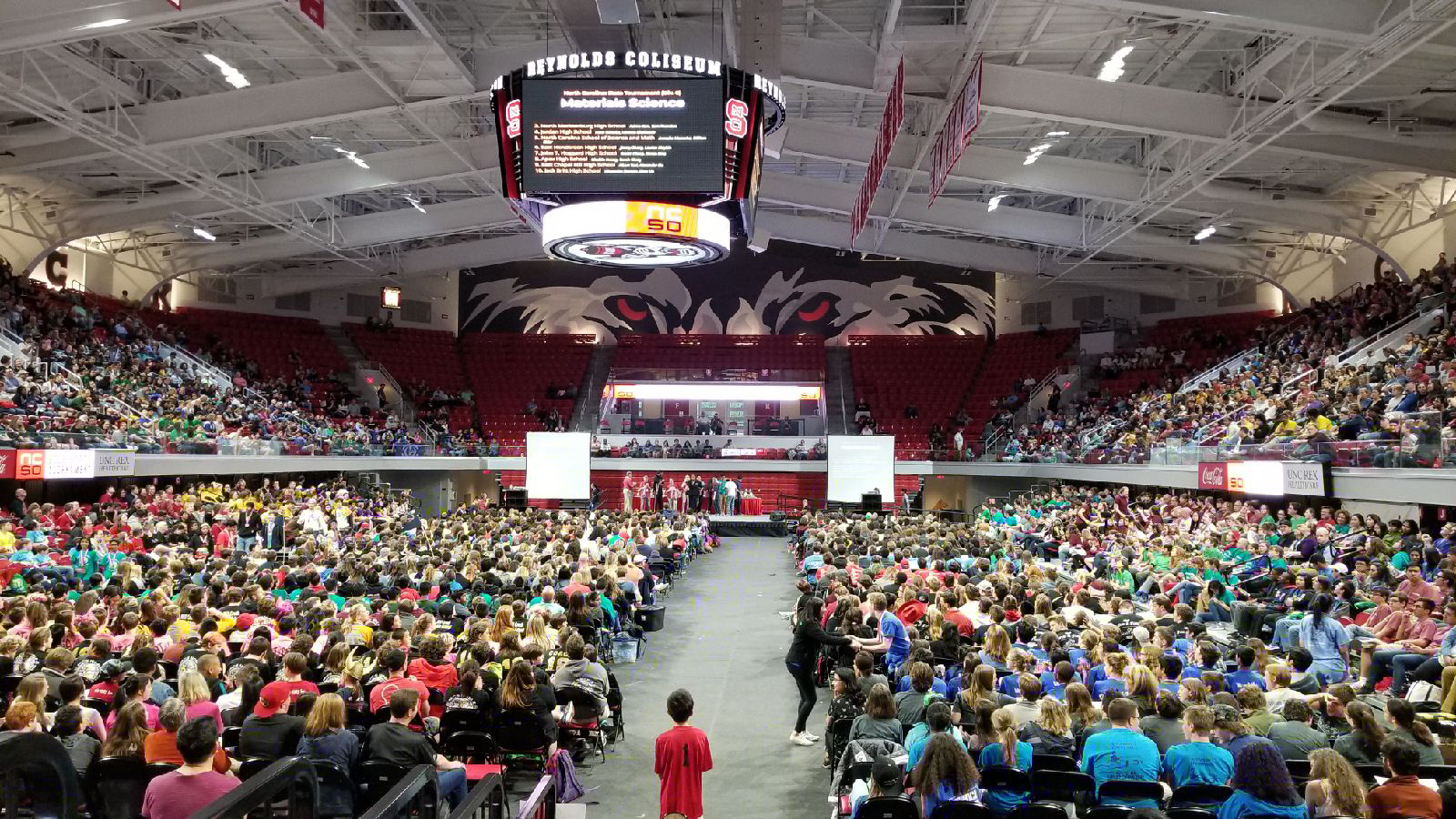 If you know me, you know that I am competitive. So you might think that I would be upset that our Science Olympiad team came in 38th in the Battery Buggy competition this weekend. Not true. This is why I am so proud of our team.

This is the third year that our school has participated in the NC Science Olympiad but the first year in the Middle School Division, which has a state tournament for the regional winners. Our Battery Buggy team placed first in the regional middle school competition at Wake Forest. So, this weekend the team of Henry (my son) and Tate traveled to the state competition in Raleigh.

Our two boys, Henry and Tate, impounded their device at 7:00 a.m. Saturday morning. Around 10:30, it was their time to compete. When they went up to the table to get their device, they stayed their talking to the judges for an unusual amount of time. At all Science Olympiad events, parents and coaches are strictly forbidden to help the children or communicate with them in any way while they are competing. So, the dads watched, not knowing the judges were telling boys that the potentiometer they used was not allowed. Even though it was the same potentiometer that was used in the Regional competition, they could not use it during the event that was happening RIGHT THEN. The boys then had eight minutes to come up with a solution, take off the potentiometer and rewire the car WITHOUT HELP from any adult, and with everyone watching. Wow! Talk about pressure. 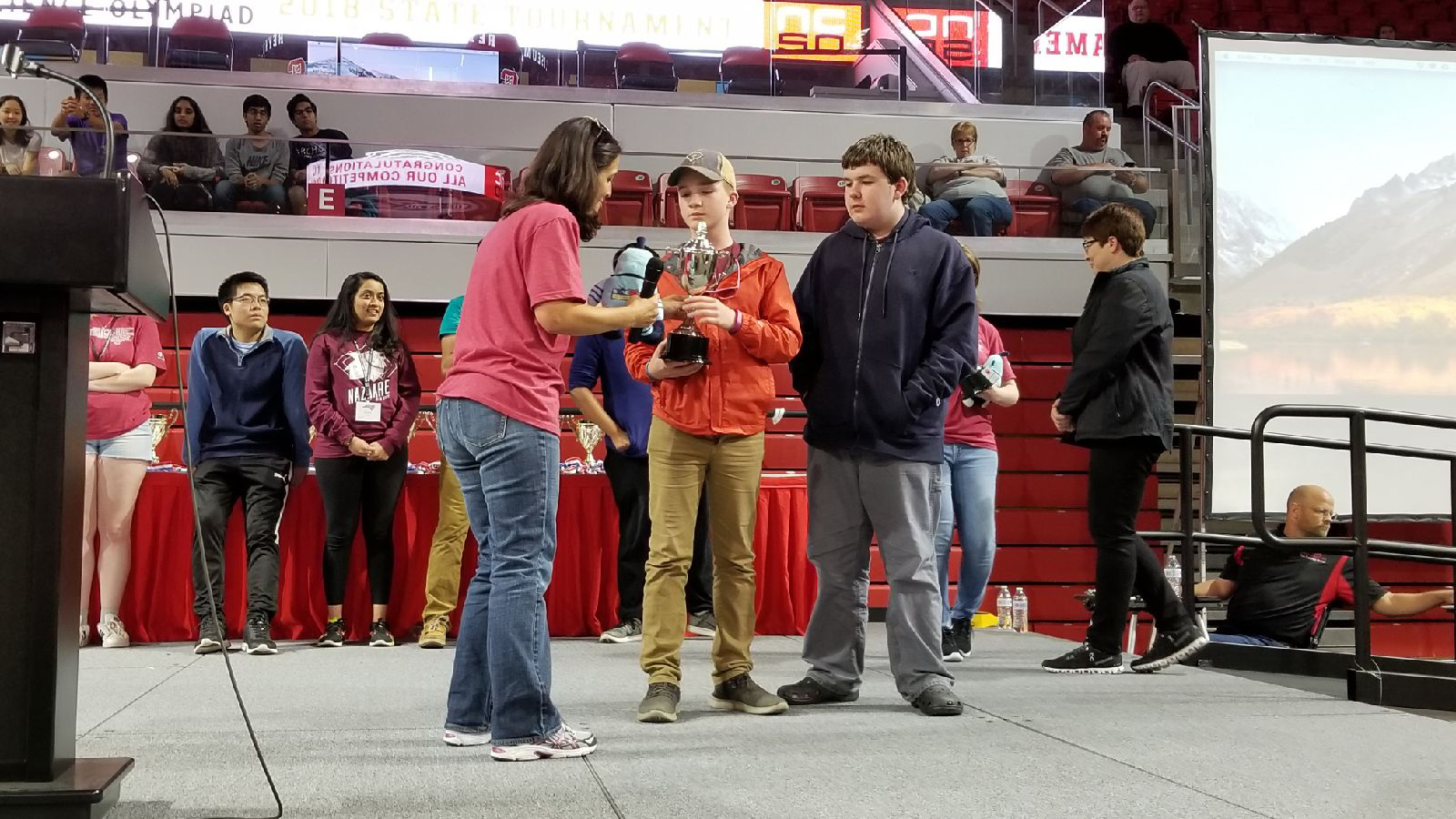 They quickly, but calmly, set about the task at hand. They were able to run their buggy but with no way to control the power being delivered by their eight AA batteries. When they triggered the “on” switch with their #2 pencil, the buggy peeled out. By the end of the 10.2-meter run, it had veered off the center line by more than 10 feet. In all the trial and competitive runs leading up to this, their device had never missed the center line by more than 8 inches.

This was all taking place while several judges, students, coaches and parents were eagerly watching. Their two dads still didn’t know the circumstances and were surprised to see how the Battery Buggy was performing, because it had done so well leading up to that point. The boys made a few more adjustments, then ran their buggy again with a similar result. When they were finished, they calmly collected their device, came out of the competition area and began to review the rules sheet. They were not sure that the ruling on the use of their potentiometer was accurate according to the event guidelines. So, the boys made an appeal to the judges. They were hoping the appeal judge’s opinion would be different than the event coordinator’s ruling.

For over an hour, our two students discussed their appeal with two structural engineers, an architect and two science teachers who knew just about everything you could imagine about electronics. Henry and Tate learned that the potentiometer installed on their device had electronic features that were prohibited in the competition and would have given them an unfair advantage over their competitors. The boys asked countless questions trying to gain a better understanding about what could and couldn’t be used in the competition. They learned there was a Question and Answer page on the State Science Olympiad website where you could ask questions about each of the events and see questions and answers from other schools. They were getting better prepared for next year’s competition.

Winning 1st or 2nd place or even being in the top 10 shows that you worked hard and know how to make a good device. But we already knew how well their buggy performed. We saw how hard they worked throughout the spring. We knew that they built a good Buggy, because they won 1st place at regionals. At the Yadkin Valley Community School, we teach the whole child. That means that we not only teach them the science needed to make a Battery Buggy, we teach them the problem-solving skills to be able to completely regroup in 8 minutes when said Buggy isn’t working. We teach them about kindness, which they demonstrated as they cheered on their competitors. We teach them that it is OK to question, as was evident while they talked to the judging panel for an hour about rules and logistics. It was impressive to see these young men being so confident in their work and respectful in their appeal. What a wonderful life skill!

In the end, the appeal was not successful, but Henry and Tate handled it in such a mature and gracious way. Even though their event ended at noon, they decided to stay for the awards ceremony that didn’t start until 6:30, knowing that their Buggy had not performed well at all. The awards ceremony was held at the Reynolds Coliseum on the campus of NC State. For over an hour, the emcee announced the top 10 finishers in each of the middle school and high school events. As the names were read, each team went forward to receive their respective medals. After all the events were announced, the emcee began to talk about the Spirit Award. She said, “This year’s award goes to a school who despite technical difficulties, regrouped to work as a team, cheered on their competitors and dealt with their adversity in a gracious manner. The Spirit Award goes to the Yadkin Valley Community School!”