Home » Uncategorized » If your beak was like tweezers or tongs or a straw, what kind of bird would you be? »

If your beak was like tweezers or tongs or a straw, what kind of bird would you be?

The students have been studying animals (fish, amphibians, reptiles, birds and mammals). Recently, we spent the morning learning about birds in a unique way. First, the kids were paired up and given a “beak”. Each team had a different kind of beak (such a straw, tongs, tweezers and a small cup with lots of straining holes). There were food stations all over the room. The idea was to see how much food they could get into their “stomach” which was a red solo cup while using only their beak. Some food was in water, some was in a log, some was flying through the air (picture Mr. D throwing marshmallows and kids trying to catch them with tweezers). There was even a vase of water to represent nectar. What they learned was that they could tell what types of food a bird could eat and where it might live depending on its beak. For example, the team with a straw was a hummingbird. They couldn’t catch flying marshmallows or eat food underneath the water, but they were the only ones that could get the “nectar” out of the vase. The students discussed and graphed their findings. Next, they watched a video titled Bird Feeding Adaptations: How Beaks are Adapted to What Birds Eat. Finally, we went into the outdoor classroom where Mr. D had a surprise. He brought a hen from his farm. They talked about the different parts of a bird and each got to hold the hen. This was such a great way to tie everything together in a way that they could truly understand because they could touch it, try it, talk about it, hold it, watch it, graph it and more. 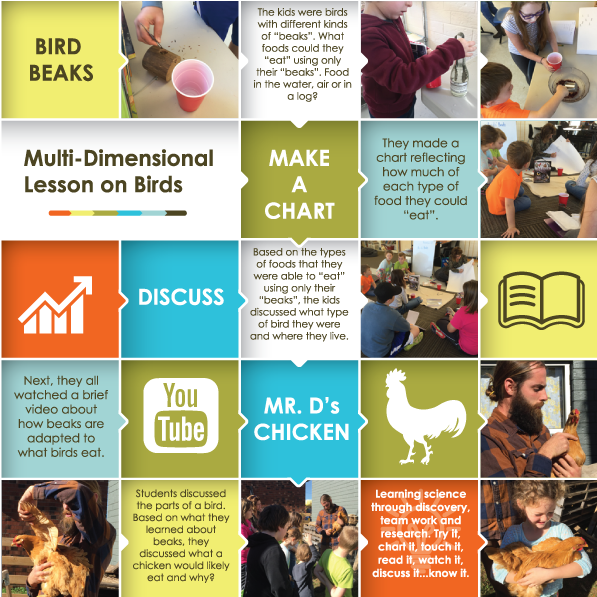